Fuser-A-Fresh-Remix
Share
Facebook Twitter LinkedIn Pinterest Email
Developer Harmonix has made its mark on the video game industry with its unique integration of music and gameplay. While Guitar Hero might be the studio’s best-known outing, Fuser is an even more evolved manifestation of Harmonix’s vision; it’s a game that uses popular songs to deliver a musical experience that is as enjoyable to shape as it is to listen to.

Fuser puts you behind the turntables and mixers, giving you full command of a catalog of hit songs spanning rap, R&B, dance, rock, and country music. Use four turntables (controlled with your gamepad or mouse). You mix different elements of these songs to craft your own creations. I was often surprised by how well these songs melded together; I never could have guessed combining the beat of Childish Gambino’s “Summertime Magic” with the bassline of Donna Summer’s “Hot Stuff,” the synth of Billie Eilish’s “Bad Guy,” and the vocals of Smash Mouth’s “All-Star” would work so well in concert. Discovering surprises such as this is often an organic process in Freestyle mode, where you have no limitations or focus on the score, but Fuser does a terrific job of teaching you the gameplay through career mode.

You’re cast as an up-and-coming performer, working to gain the respect of the hottest DJs on the festival scene. While these personalities are often grating and cartoonish, the career mode is a thinly veiled (yet effective) tutorial set to a rise-from-obscurity narrative. In this mode, you learn the basics through objectives designed to please the crowd and boost your score, including changing the tempo or key, applying different effects to discs, or cuing up multiple discs to jump simultaneously through the awesome riser function. Swapping out discs individually works well enough when trying to find what works with a certain sound, but the riser feature seamlessly transitions from your current creation to an all-new masterpiece.

The library of songs available at launch is impressive and diverse, giving you ample tracks in each genre to choose from. Each song brings something unique, whether it’s the hot Latin beat of Bad Bunny’s “Yo Perreo Sola” or the heavy guitar riff of Rage Against the Machine’s “Killing in the Name.” While certain combinations work better together than others, I rarely found any that sounded downright bad; a testament to the impressive technology Harmonix uses to blend sounds and songs together in organic ways. If you happen to find the perfect audio concoction, you can save a snapshot for easy access in the future.

Once you get the feel for marrying disparate songs into cohesive and infectious mixes. You can use other tools to take your creations to the next level. Adding effects like delays, filters, and tape stops add extra flourishes to help make your fusion your own. But nothing allows you to customize quite like performing on the several available instruments. You can’t play whatever note or pattern you’d like, but you can choose from various instruments including distorted vocals. A string section, and trap drums to create your own loops to drop into the soundscape. While I rarely preferred these custom-instrument tracks over the established songs that make up the core tracks. Nothing made my songs stand out more than adding my own custom piano loop.

Creative expression is obviously crucial to the core gameplay experience, but it carries over into how you present your set. You can customize your character’s appearance, including unlockable clothing and accessories, but I love tinkering with different stage setups and light shows. Going beyond how customized the song mechanics are, choosing the perfect pyrotechnics, fireworks, and laser shows to match the mood I’m setting in my performance is a lot of fun. 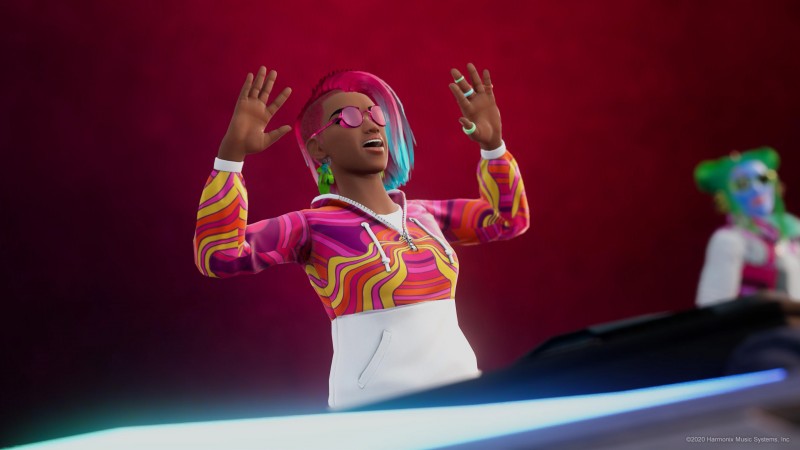 Music can enjoy certainly alone, but the festival scene is a social experience. And Fuser allows you to go online for collaborative multiplayer. When you hop into a lobby, you take turns with up to three other people to perform your perfect production. It’s always fun to see what other people come up with. This is why I love this mode. As well as the social section, which holds themed events featuring songs from different genres and decades. You can submit your own creation to these events or listen to recordings from other players.

Battle mode is a chaotic competitive multiplayer option where you take on other players using ever-evolving songs you come up with on the fly. Unfortunately, even more than a week after launch, the battle mode does not work on Xbox. While you can undoubtedly have fun with Fuser’s other avenues of play. The fact that Harmonix released a non-functional mode as part of the package is disappointing. However, this is a comparatively small portion of Fuser as a whole. So those who can’t get into a match aren’t missing much.

By affording you such command of a terrific catalog of diverse hits and certifiable classics. Fuser allows you to aptly fulfill the DJ fantasy better than ever before. Without the need for clunky peripherals, you’ll only use them for one game. Though I poured hours into the experience. I still feel like I have so many corners and interactions to explore within the library of available tracks. Fuser transcends musical genres to deliver a magical and intuitive music creation toolset within the framework of a game.

All About Know to Situs Slot Gacor

Hopscotch game: What Exactly is It?